I recently felt the urge to experiment with my TDD workflow and improve it. It had too many manual steps, like running the tests, starting a commit, writing a commit message, pulling changes, and pushing it. It felt boring and wasteful. I want to automate this stuff and eliminate all the waste.

We’re not aiming high enough with the continuous part in CI/CD.
“Integrate at least daily” … Come on!
“Hourly” … We can do better than this.
“Short-lived Feature Branches” … You got to be kidding. It’s rather “short-lived lies”.
None of this is continuous. We need to get better and decrease the risk even further. I want to integrate actually continuously.

My inspiration comes mainly from the ideas of continuous integration, continuous testing, TCR, and limbo on the cheap.

I came up with a way that drastically increased my commit frequency. I managed to create 63 commits in just 25 minutes practicing this way, where I peaked at 6 commits per minute. Yes, it was just a kata, but that’s not the important part. On many occasions literally every keystroke went live, and it was all working - covered by tests.

What I did is based on the following requirements:

Not that hard to achieve actually. Just need proper tooling and a little bit of scripting. The language I’m trying this with is Java.

The right tools for the job

Since I use IntelliJ, which is a great, maybe the best IDE (*cough* it became a little buggy as of recent *cough*), it saves my code automatically. So that problem is already solved. For the continuous running of the tests, I know a few options.
IntelliJ offers a way to trigger the tests automatically, but it’s rather slow. Then there is this old-school plugin infinitest, but I need something for the CLI so I am able to script it. And it should be really fast. Incremental compilation would be key.
Gradle has it, and it is quite fast. With Gradle, I could also make the test report pretty using this test-logger plugin. 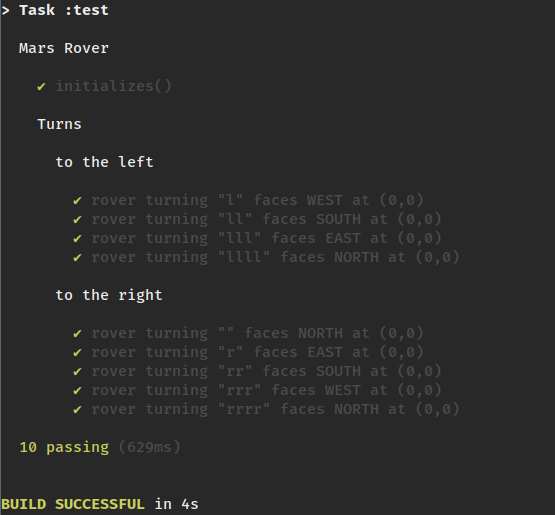 Another option would be the quarkus continuous test runner, which is fairly new, and its test report is so ugly. Also, I have no idea how to customize, or script it. So I am going with Gradle for now.

On top of the incremental compilation, Gradle ships with a continuous test runner in:

But since I need more control I chose to use a little helper tool called watchexec instead. It watches for file changes and then executes a command. Like this:

I made some tests and it is just as fast as the Gradle continuous test runner. If you’d like even more control and a more complicated script, you could also use inotifywait. However, I like to keep it as simple as possible.

Next, I needed to commit as soon as the tests pass. A simple bash script would do, but I like to use a modern task runner for the job. I settled with just. In case you did not know, it is a modern version of Make. And it is written in rust for whoever that may concern. The way this works is you just create a justfile and specify your tasks in it. The commit command looks like this.

Simple and concise. To execute it you run:

And I do not even have to remember. My shell courteously suggests to me the available commands.
The @ means that the command is not printed.
By default just would abort on an error exit code, whereas the - tells it to ignore that and continue. I need this for the case where the tests pass, but I have not changed anything. For example when I add something and delete it right away. Then there would be nothing to commit, and git would throw the error, having just abort the task. I could also allow the empty commit using the allow-empty flag. But why allow an empty commit for no reason!? That would be inventory, wasteful.

So here are the first commands in a justfile.

Now we are able to give it a try. Small steps.

Wow, this felt smooth. During all of this, I had not manually done a single save, test run, or commit. The terminal was open on the right-hand side of my screen, and I got that feedback immediately, continuously.

Let’s take a look at the resulting git history.

Whoops, that’s not very expressive. But the commits are so small and pleasant to review. It’s like a playback of every little step that was taken. It is the actual history. Honestly, I think the flow might have more value than the documentation. Still, I would like to improve on that by sneaking in descriptive empty commits every once in a while.

We are used to writing git messages that describe what we did after we did it. But for this, I would like to propose a different way. I want to use a commit message to describe what is next. In other words: What my current goal is. So let’s add a command to create such descriptive empty commits.

Every time I start working on a new goal, I want to write it to my git history first. Something like > just goal make rover turn left. The other commit messages would stay ‘wip’ commits and that’s fine. One idea would be to use further tooling to decode some of the refactoring commits. For example: The refactoringinsight plugin.

My commit history would then look something like this:

But what about Integration?

Lots of small commits on my computer are nice. But if I work in a team I need to integrate my changes to the mainline, too. So I want to pull before I run my tests, and I want to push after each commit. It’s called Continuous Integration for a reason, right?

Let’s add that to the justfile.

And I think we’re done.

This is the complete file. It also contains a TCR task.

Notice how I renamed the tdd-commit task to ci. Continuous Integration is not only about what the build server is doing, it is primarily about what we do.

Coding with this script feels super smooth. It is actually continuous.

Also, it was not that complicated to set up. You can probably do even better.

Imagine remote pair- or mob programming with this. Hand-overs could not be easier. You just exchange the screen-sharing while the tests pass. And that’s it.

Probably some people are already working this way? Let me know!